Artist Of The Year 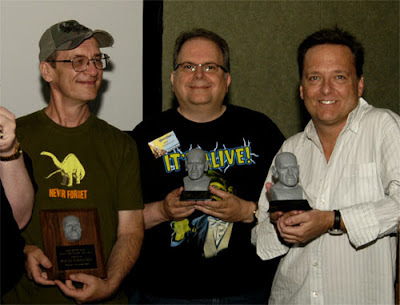 Bernie Wrightson (Rondo Award Hall Of Fame),
Mike Schlesinger (Rondo Monster Kid Of The Year)
and Frank Dietz (Rondo Artist Of The Year).
One of the highlights of this year's Wonderfest was the Rondo Awards ceremony. The Rondo Hatton Classic Horror Awards are presented annually, representing the very best in classic horror in films, books, magazines, etc. A record number of 3,000 people voted this past year, and for the second year in a row, I was voted 2007's ARTIST OF THE YEAR. 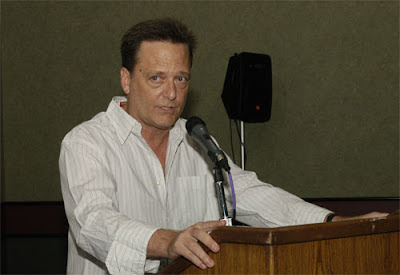 It is a great thrill and true honor to have my work recognized by the fans at large. It means the world to me, and I do not take it's importance lightly. I vow to continue to encourage and promote the work of other classic monster artists, particularly those who are just starting out, as I have done on the Classic Horror Film Board this past year.

I also had the honor and privilege of presenting the Rondo Hall Of Fame Award to my very good friend Bernie Wrightson. It was quite an emotional moment for us both. 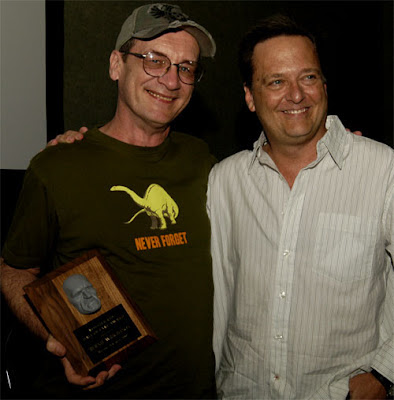 I also want to give a congratulatory shout out to a few of my other friends who came home with Rondos this year - Writer Of The Year Tim Lucas (he got two!), Terry & Tiffany Dufoe of Cult Radio A Gogo, Danny Roebuck and Chuck Williams, Joe Dante and Michael Schlesinger. Way to go, amigos!!
Thanks to Eileen Colton for all the swell photos you see here!
Posted by Frank Dietz at 10:14 AM 1 comment:

What a couple of months.

First the surgery, then right into DARK AND STORMY NIGHT, then right onto a Dreamworks animated short, and finally on to Louisville, Kentucky for the 2008 Wonderfest Model & Toy Expo. I've been a guest at this event for the last decade, and I enjoy it more every year.

The other guests this year included Keir Dullea and Gary Lockwood from 2001: A SPACE ODYSSEY and beautiful Linda Harrison from PLANET OF THE APES, plus my good friends Bob and Kathy Burns, John Goodwin and bloodbrothers William Stout and Bernie Wrightson. I once again had the pleasure of performing with Doctor Gangrene and Nurse Moan-Eek in their Chiller Cinema live show, and spent a good deal of time hob-nobbing with all the great folks in The Old Dark Clubhouse. Thanks go out to Gary Prange for hosting the ODCH, and special thanks to Dave Hodge, Dave Conover, Donnie Waddell and the entire Wonderfest staff for allowing me to participate in what I consider the best show of the year. I'm already looking forward to next year's show, their 20th anniversary! 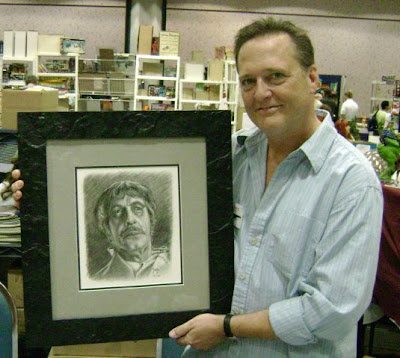 Robert Taylor took this shot of me with a Doc Phibes piece his cousin Sara bought last year and had beautifully framed for display.
Posted by Frank Dietz at 8:43 AM No comments: