Great news for fans of THE LOST SKELETON OF CADAVRA and the films of Larry Blamire! Shout! Factory will be launching the DVD release of the much-anticpated sequel, THE LOST SKELETON RETURNS AGAIN at the San Diego Comic-Con in July. There will be a signing on Thursday, July 22nd at 2 p.m. at the Shout! booth (#3749) with myself, Larry Blamire and several other cast members. This is the only opportunity to pick up a copy of this terrific film - and Larry's other new film, DARK AND STORMY NIGHT - before the street date of August 17th. 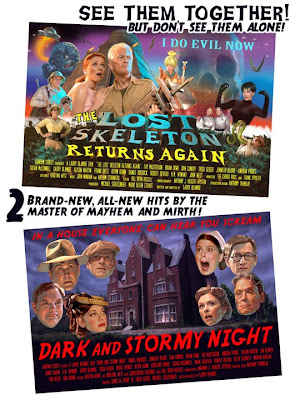 If you're attending Comic-Con this year, please stop by on Thursday at 2 p.m. and say hello, and grab your copy of these very funny films before they sell out. If you're not going to be at the Con, you can pre-order the DVD's at Amazon:

Two fun examples of a little computer manipulation. Claude Rains as THE INVISBLE MAN was done by drawing the head and body seperately, then knocking down the transparency of the head drawing. Lon Chaney's PHANTOM was altered with a "blur" tool to recreate the fuzzy, scary image from the original film. 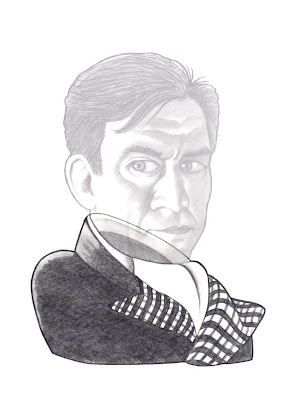 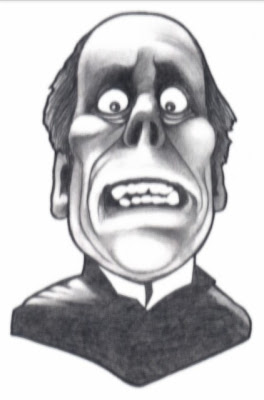 To celebrate this week's 50th anniversary of Alfred Hitchcock's PSYCHO, I present this page from my 5th book, MY FAVORITE SKETCHY THINGS. Why? Because we all go a little mad sometimes... 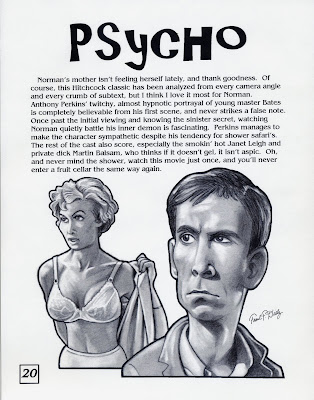 Posted by Frank Dietz at 9:19 AM No comments:

Back To The Watercolor!

Here's a recent commission of CHRISTOPHER LLOYD as "Doc Brown" from the BACK TO THE FUTURE trilogy. Richard Cromwell of Florida has hired my several times, often when he expects to be meeting a celebrity at an upcoming convention. This was created in anticipation of his meeting the talented Mr. Lloyd, and with the hope that he would sign it. I have to be honest - this was my second attempt. The first one...well...just didn't work. I had to start from scratch, and I'm glad I did. This one is funnier and the likeness works. I was surprised at how difficult this character was to nail down. I expected him to be quite easy. Just goes to show...you can never tell until you start putting it on the paper... 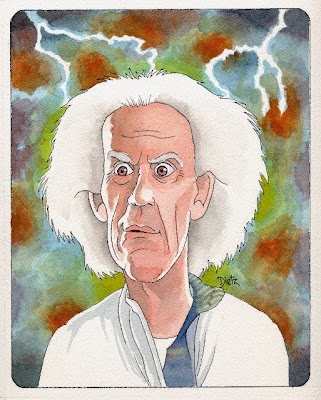 Posted by Frank Dietz at 7:03 PM No comments:

This tribute piece of PETER CUSHING and CHRISTOPHER LEE was a commission for serious collector David Haft. I am privileged to have met both of the gentlemen depicted in this piece. The Hammer films were some of the first horror movies that I saw in a movie theatre, and so hold a special place in my heart. 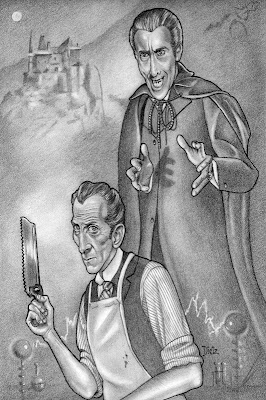 I didn't really love John Carpenter's 1981 remake of THE THING when I first saw it. But over the years I have come to appreciate it more and more. I now consider it one of my very favorite horror/sci-fi films. So I was more than happy to create this commission piece for fan John McShane. John is already considering a companion piece, featuring the rest of the cast...proving that "one Thing leads to another..." 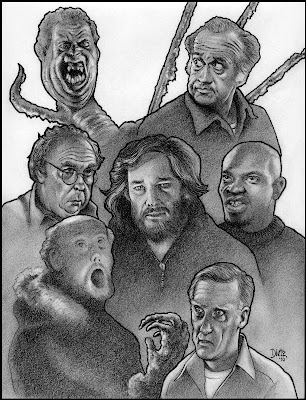