Recently uncovered photos of The Chicken Monster reveal what life was like for the horrendous hen during and after it's debut in THE EDGE OF HELL, which was my original title for what became ROCK N' ROLL NIGHTMARE. The initial cut of the movie and the Canadian VHS release retained that title. Why was it changed? You'll soon be able to read all about it, as John Fasano and I are preparing to publish a book that tells the whole story of our "Canadian Four" horror films of the 1980's. The working title is "Rock N' Roll Zombie Nightmares," and is scheduled for release later this year. 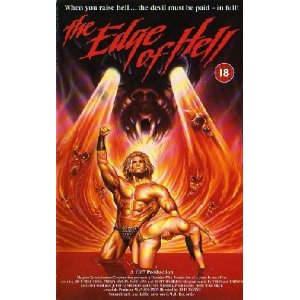 In the meantime, here are some never-before-seen photos of the beloved Chicken Monster: 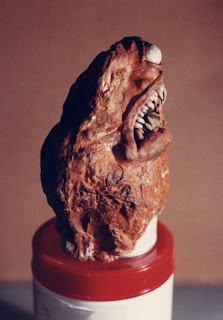 A nice profile shot, set upon a can of "Friendly Plastic" 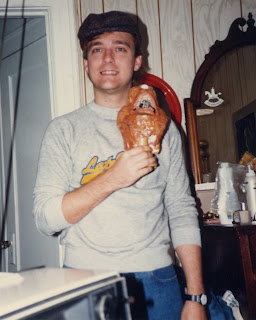 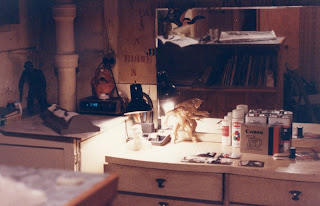 In my makeup studio for work on BLACK ROSES,
The Chicken Monster can be seen roosting above the
alarm clock. One of the RNRN Squid Monsters
can be seen at the top of the photo.
﻿Next up, in the final Chicken (Monster) Chronicles segment, the answer to the question eveyone is asking: Where is the Chicken Monster today?
Posted by Frank Dietz at 9:53 AM